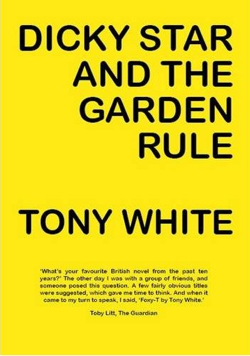 The sound of summer is the crack of leather on willow to some. To me it means the popping of champagne corks at book launches. Last night’s literary soirée was the launch of Tony White’s Dicky Star and the Garden Rule. I’ve been to al fresco book launches before but, given the weather, I was pleased to see this was an inside job, at the Free Word Centre in London. I was at there early for a meeting, and bumped into Tony as he arrived to do a roadie-style sound check. I was something of a jaywalker for most of the afternoon, in fact, crossing the road between FWC and the Betsey Trotwood pub for meetings.

At the launch gin and tonic was served alongside the wine – a civilized form of fizz for the discerning wassailer: the wired, the writers and the wage slaves, all gathered to fête the author. Readings and questions ensued.

Launched 26 years to the day since the Chernobyl nuclear accident, the story looks at the disaster’s impact in the UK and follows Laura Morris and her boyfriend Jeremy over a 12-day timeline from the meltdown – when the USSR went full-tilt into news suppression mode – to the first open press conference from the Kremlin. Published by Forma to accompany Atomgrad (Nature Abhors a Vacuum) by the artists Jane and Louise Wilson, a series of works commissioned to coincide with the 25th anniversary of Chernobyl, this is a novel publishing venture in a world where every book from Sweden to Swaziland seems to form a tributary of Amazon.

After the launch we moved on to St John Bar and Restaurant in Smithfield – a great place if you want to gnaw on bone marrow, braised squid and a side order of greens. They also serve the best Welsh Rarebit in London (though I can’t help thinking that’s just sticking a posh-nosh pound sign on cheese on toast). It’s certainly no Jolity Farm for vegetarians: the cats miaow, the dogs bow wow – and the pigs squeal and end up with their heads and feet in pies. It does, however, have a reassuring reek of bread and Eccles cakes – a sweetener for the less carnivorous.

I managed not to debase myself by throwing wine over a celebrity this time. Okay, perhaps because Shappi Khorsandi left early. So there was no repeat of The Brian Cox Incident, and no one had to disown me. Phew.

One of the most intriguing aspects of Dicky Star is how each daily chapter contains all of the answers to The Guardian Quick Crossword from that day in 1986. So I’ve attempted this myself, by crowbarring all the words from yesterday’s crossword into this blog post. Did you spot them all? Have a go yourself – especially if you’re stuck with your writing. It’s fun. You old sleazebag.

Read the afterword to Dicky Star and the Garden Rule on Tony’s blog at pieceofpaper.wordpress.com.