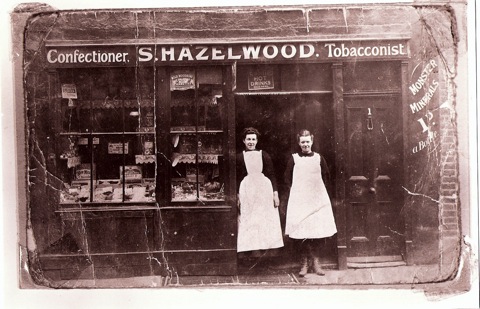 I was in Edinburgh earlier this week, to speak at a conference. On the way up I had a bit of time to kill at King’s Cross station in London so, rather than have a coffee in Starbucks, I thought I’d try to find The Family Shop.

Now, despite having worked in King’s Cross in the past (at Macmillan), and having always known that my family owned and lived above a sweet shop round there a few generations back, it hadn’t previously occurred to me to look for it. Not until I came by an old photograph and some family history notes last year. Cross-referenced with Google Maps, this suggested it was now a pub, just across the road and down a side street from St Pancras station.

This photograph was taken 100 years ago. In 1912, just as the Suffragettes were starting to chain themselves to railings and throw themselves at horses, my great-grandmother Sarah Hazelwood already had her name above the door and was running her own business. She is pictured here with her daughter Charlotte, aged 13, who I remember as Auntie Mabel.

My late grandfather John Hazelwood was also born here 100 years ago. I remember his stories of growing up on Argyle Street and his mother making ice-cream to sell in the shop. She may have made some of the confectionery too, though I’m guessing it was a less glamorous life than Chocolat. She also sold hot drinks, strong cigarettes, and hard-boiled sweets from large glass jars behind the counter.

The shop was on the corner of Whidborne Street. So – is The Family Shop now McGlynn’s pub? The street corner matches. The windows match. I had a coffee there anyway, then caught my train. 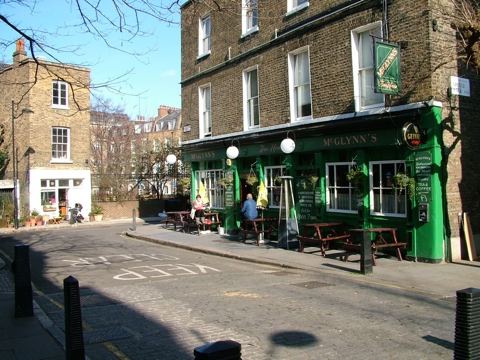 When I returned to England I dug out the Family History and was suddenly unsure if I’d been in the right building. The notes contain conflicting accounts. The Family Shop is described as on the corner of Whidborne Street and Cromer Street (not Argyle Street). This is now a newsagent and not even the original building – which would be a little disappointing. But the shop address is also listed in my notes as 1 Whidborne Street, a street number that is also clearly visible in the photograph – and the same address as McGlynn’s. This is surely where the photograph of Sarah and Charlotte was taken, and where my grandfather was born, 100 years ago.

The brief visit to my ancestral street was a reminder of my great-grandmother’s Edwardian entrepreneurialism. My business may be virtual and less Woodbine-based – but perhaps I have Sarah Hazelwood to thank for my desire to start it in the first place.