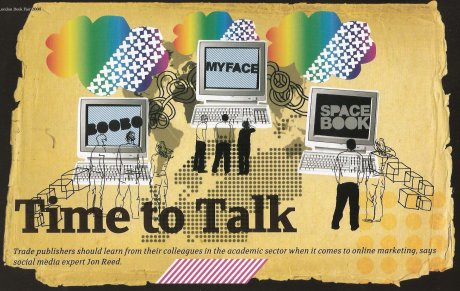 Trade publishers should learn from their colleagues in the academic sector when it comes to online marketing, says social media expert Jon Reed.

Have you updated your status today? Has anyone written on your wall? Have you spent any Linden dollars? Do you have any idea what I’m talking about? You’re excused for not knowing about mobcasts, or microblogging, or avatars, but the rest? In the 21st Century podcasts, RSS feeds and blogs remain as opaque as String Theory to a frightening number of publishers. Many don’t even know if their authors have their own blogs. And social media? It’s a mystery to them.

While they are pimping their sales forecasts, their customers are pimping their MySpace and Facebook profiles. A savvy few trade publishers are investing in social media – Penguin, HarperCollins, Random House and Simon & Schuster – but many others remain on the fence. The same is not true of scientific, technical and medical (STM) publishers.

STM publishers have form when it comes to pioneering digital technology. Social media is a natural extension of their core activities, says Ian Russell, chief executive of the Association of Learned and Professional Society Publishers (ALPSP), sees social media as a natural extension of the core activity of STM publishers: ‘Scholarly communication is the exchange of ideas and discourse to advance knowledge – whether that’s in the pages of a journal, at conferences, or via social networking sites. Trade publishing tends not to be so discussion-based.’ Timo Hannay, Publishing Director for Nature.com, agrees: ‘The reason Nature exists is to facilitate scientific communication. Social media is just a new way for us to add value.’

Social media helps STM publishers to stay relevant and support research, even in the face of the Open Access movement. It’s also driven by the collaborative ethos that exists in academia. Academic, scientific and student communities are well established online, and want content that is current, not necessarily in hard covers.

According to a survey of US college professors by Thomson Learning last year, half thought social networking would change how students learn, a third that it would change the way they teach, and a third saw podcasting as a valuable way to reach students. A number of US universities, including Berkeley and Ohio, have put lectures on YouTube or have virtual campuses in Second Life.

Huge opportunity
The book world pioneers of social media are authors and academics, not publishers. Steve Weber, author of Plug Your Book (Weber, 2007), tells The Deal: ‘Academic/STM authors have a huge opportunity with social media because their work is so specific. Anything they do in the social networking arena is going to make them much more findable.’

STM publishers have joined the conversation. Leading the way is Nature Publishing, with its own social network, podcast, blogs and islands in Second Life (see box: Jargon Buster). In the past year, Blackwell, OUP, Palgrave, Pearson Education, SAGE and T&F have followed Nature’s lead with their own social media strategies.

Nature entered SL in 2006, then handed its virtual space to the scientific community as a place to meet and experiment. The community now runs itself – mostly holding speaker events. There may be only 40 people in the world who want to hear about a new species of beetle, but thanks to Second Life that niche audience can be reached in one go at minimal expense. In December (2007), Nature held a three-day event in SL to coincide with the UN-Bali Climate Change Conference. What better venue to discuss climate change without leaving a carbon footprint?

A growth area is podcasting. Within three months or launch in 2005, the Nature podcast had 10,000 listeners and a sponsorship deal. Blackwell started journal-related podcasts last year. In September, Cengage Learning (formerly Thomson Learning) launched their CourseCasts – weekly podcasts on technology trends. Elsewhere, Harvard University Press and OUP are blogging, while like SAGE, Blackwell and the Institute of Physics are experimenting with subject-specific social media web portals.

‘People like me’
Those using social media are clear about their reasons for doing so: to engage their readership, create community, build open, trustworthy relationships, and enhance their brand reputation. In an age when trust is in ‘people like me’ rather than in corporations, these things matter.

But what is the return on investment? You may as well ask, what is the ROI on business cards? Successful publishing is not a top-down affair in a participatory media culture. A conversation is taking place, not a lecture. It is important to be a part of it. A key objective is word of mouth: tapping into niche communities and making your content easy to find, recommend and share.

It is possible to make money with advertising and sponsorship. In SL, publishers make money from event sponsorship and hiring out virtual venues. Podcasts also attract sponsorship. When it comes to social media portals and publishers’ own social networks, the data captured from the community can be used for targeted advertising.

Content must come before cash. Get your content right, build a community around it, and the cash will follow. Joanna Scott, web publisher at Nature, says: ‘If you can create something useful to people, you can find a way to monetise it later.’ The trick is to create something genuinely useful. That may mean more market research than in the past, but by using social media, you are already ahead of the game, because the direct connection with your users automatically provides a greater understanding of their needs.

Déjà vu?
Some of us remember getting our fingers burned on digital technology in the 90s. The prophesised future failed to materialise and left many high and dry. But, as with comedy, the secret of investment is timing, and what failed to materialise then is here now. There is much to be learned from STM publishers, particularly as they enter a new phase of development and consider monetisation options.

But things move quickly, and corporates mired in the inertia of decision-making by committee risk missing the boat. Sometimes you just need to jump in. Steve Weber says: ‘It’s still early days in social networking, so the opportunities for first movers are immense.’

For once independent publishers have an advantage and social media enables them to punch above their weight. Social media should be central to publishers’ marketing. We’ve seen the surveys, analysed the trends, and watched the successes. It’s time to start talking.

How to Build Your Social Media Strategy

This website uses cookies to improve your experience while you navigate through the website. Out of these, the cookies that are categorized as necessary are stored on your browser as they are essential for the working of basic functionalities of the website. We also use third-party cookies that help us analyze and understand how you use this website. These cookies will be stored in your browser only with your consent. You also have the option to opt-out of these cookies. But opting out of some of these cookies may affect your browsing experience.
Necessary Always Enabled
Necessary cookies are absolutely essential for the website to function properly. This category only includes cookies that ensures basic functionalities and security features of the website. These cookies do not store any personal information.
Non-necessary
Any cookies that may not be particularly necessary for the website to function and is used specifically to collect user personal data via analytics, ads, other embedded contents are termed as non-necessary cookies. It is mandatory to procure user consent prior to running these cookies on your website.
SAVE & ACCEPT